Who Will Patent the New Antibiotics Sourced from Komodo Dragons 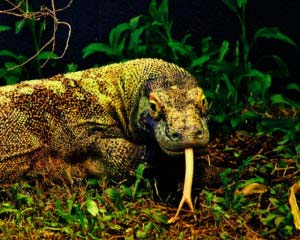 As a source for new antibiotics has been found, the race to patent a new drug will officially begin. Barney Bishop and Monique van Hoek from George Mason University, Virginia, recently published in The Journal of Proteome Research that Komodo dragon blood consists of antimicrobial proteins, which could aid and combat the antimicrobial resistance epidemic.

Komodo dragons can be found in Indonesia, and are the biggest lizards currently living in the world. The pathogenic bacteria in their saliva is deadly, and the proteins in their blood (antimicrobial peptides “AMP”) make them resistant to other animals’ bites. Dr Bishop, who works at the St Augustine Alligator Farm Zoological Park in Florida, found that the blood of Komodo dragons contain 48 AMPs. When tested by Dr Van Hoek, he found these AMPs significantly reduce the growth of bacteria, such as Staphylococcus aureus, which has strains that have become antimicrobial resistant in many areas of the world.

Once scientists are able to extract the proteins and develop new antimicrobial and antibiotic drugs, the big question will be whether the drugs should be patented and who will take the lead. Patents provide the innovator legal protection to preclude others from using the patented innovation. The aim is to encourage greater development. However, when it comes to pharmaceutical patents, it is important to balance the innovator’s rights and access to the public. Antimicrobial and antibiotic resistance has become a serious issue worldwide as it targets diseases such as HIV, tuberculosis, cholera and many more.

Normally, new pharmaceutical products can take up to fifteen years to develop, whereas the patent for the product will last a minimum of twenty years. The technology necessary to develop new drugs has a high cost, so scientists will probably look to find financial sources from large pharmaceutical companies. Companies, such as Bristol-Meyers Squibb, who spend a great deal on research and development for new drugs, will surely enter the race to design an antibiotic that combats resistance. However, whichever company submits a patent application for the proteins in Komodo dragon blood first will make a tremendous breakthrough in medicine.

As patents can be necessary in the development process, pharmaceutical companies must keep in mind that this new drug will have to be accessible, in terms of affordability, in all parts of the world in order to make a significant impact on international public health. As patents increase the cost of new drugs it will be key to implement a balance for the patent holder and society. As a solution, the future patent holder can give permission to generic manufacturers around the world to produce the drug, while maintaining the patent in their home-state.  Therefore, the patent holder can reap the benefits of the patent while spurring innovation, and countries who cannot afford to purchase the drug at a high cost will be able to manufacture the drug and distribute it at a lower cost.